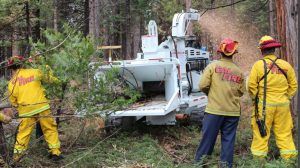 Sonora, CA – Areal surveying by the U.S. Forest Service shows a hike in the number of dead trees from 66 million to 102 in California.

The flyovers detected more than a 100 percent increase in the massive tree die off across the state since 2015. The additional 36 million dead trees since May are attributed to the state’s five-year drought and bark beetle infestations. (Click here for a Cal Fire bark beetle video) In response to the finding, Cal Fire warns of a heightened danger of falling trees and wildfire for years to come. “Although the epidemic tree mortality we are facing is devastating, it has galvanized partnerships at all levels, and focused renewed interests on forest health,” said Chief Ken Pimlott, CAL FIRE director and California’s state forester.  “With disaster comes opportunity, and we will continue our work to remove the dead and dying trees that pose the greatest risk to public safety and private property.”

Cal Fire has been combating the problem by removing more than 423,000 trees in 10 counties, inspected and cleared of dead trees nearly 52,000 miles of roads and powerlines, treated more than 26,000 acres and created roughly 1,300 acres of fuel breaks. (Click here to view a video of the work Cal Fire has been doing to combat dead trees.) U.S. Agriculture Secretary Tom Vilsack agrees that the increased tree mortality ups the risk of catastrophic wildfires, putting people and property in danger. He called on Congress to act, arguing more money is going to fighting fires than forestry management.  Already state grants totaling over $10 million have gone toward local projects targeting dead and dying tree removal around homes.  Another $6 million of state funds have been used to buy equipment for removing dead and dying trees in high-hazard zones.

“Work to address this massive bark beetle epidemic began quickly a year ago, and the joint undertaking continues,” said Mariposa County Supervisor Kevin Cann.  “The sheer number of dead trees is hard to imagine, but it’s real and we must continue our efforts to address the fact that this will be an ongoing issue for years to come.  We have come a long way since Governor Brown first declared this emergency. It is important that we recognize the substantial progress as we redouble our efforts to deal with this ecosystem impacting event.”

The highest-hazard region for tree mortality is in the central and southern Sierra Nevada stretching across ten counties from Placer to Kern, according to forest officials that note they’re also beginning to find dead trees in Northern California. For information on the state’s Tree Mortality Task Force that includes more than 80 local, state and federal agencies and other stakeholders, click here.