Marijuana Not For Sale In Tuolumne County 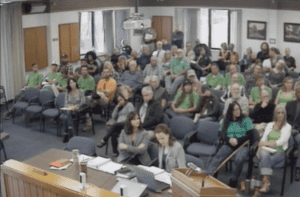 Sonora, CA — The Tuolumne County Board of Supervisors discussed how to proceed with marijuana regulations after the passage of marijuana for recreational use by California voters last week.

The consensus after much debate was to request an ordinance be drafted immediately to ban all commercial distribution and retail sale of marijuana. The board room was packed as seventeen people spoke at the meeting including the Calaveras Cal Fire Battalion Chief, Tuolumne County’s  Sheriff, the Health Officer and District Attorney. The main debate centered around reconciling the new law, referred to as AUMA (Adult Use Marijuana Act), with current county medical marijuana laws outlined here. In contrast, the AUMA allows any residence, with the permission of the land owner in the case of a rental home, to grow up to six plants inside, or outside if secured. No growing can be done within view of public places.

Tuolumne Sheriff Jim Mele noted of the crowd, “These are all law abiding citizens they want to do the right thing, but what we have seen because this is not accepted or looked upon by the federal government as a legitimate… I’ll use it this way, it’s still a schedule one offense. So when we talk about the finances, banks are still hesitant, it’s a cash crop, and that’s why you see some of these organizations move in because it is a cash type business.” Sheriff Mele and several others referenced criminal activities in Calaveras County.

District Attorney Laura Kreig said “We are not concerned with the personal use of marijuana as allowed under prop 64. Certainly in the area of commercial cultivation those provisions and regulations and licensing from the state, as county counsel advised, really take effect January 1st of 2018. I can tell you the resources that law enforcement will have to spend will far exceed any revenue that’s going into the law enforcement fund out of prop 64.”

Cal Fire Battalion Chief Matt Gilbert stated he doesn’t have a stand, but is charged with enforcement of forest and fire laws and there were 27 violations in Calaveras in 2016. The instances involved marijuana grows that illegally cut down trees and negatively impacted streams. Nine of the cases are still pending. He stated “On the fire side there were four fires related to marijuana grows, costing $1.4 million, the largest was the Appaloosa fire in July burning 310 acres.”

Gary Stockel, Tuolumne County Agricultural Commissioner, mentioned how to find the safe and permitted types of pesticides to use on personally cultivated marijuana located online here. A woman who spoke after him mentioned she has grown plants and marijuana over the years and never used or needed pesticides and that deer do not like to eat marijuana.

County Health Officer, Dr. Liza Ortiz, referenced the newly released Tholumne county health assessment which details the issue of substance abuse and children born addicted to drugs their mother used while pregnant. Dr.Ortiz stated there are not enough conclusive studies about marijuana yet. She stated more studies are being conducted and will be released but not enough information is available new.

The eventual decision for many board members related to the state having until January 2018 to finalize regulations. The board agreed their ad hoc committee, already created to address regulations, should be in charge of submitting their best solutions, including adding or changing members to focus on public health concerns, to bringing solutions to board as soon as possible.