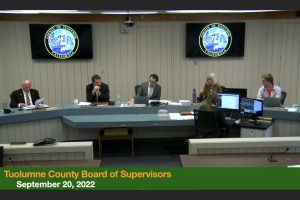 Sonora, CA – After several hours of debate at today’s meeting, including feedback from the public, no vote was taken by Tuolumne Supervisors on adopting the Tuolumne County Climate Action Plan.

The plan identifies existing and projected greenhouse gas emissions, sets emission reduction targets, and establishes policies and actions to reduce emissions. It was previously endorsed by the Planning Commission, and it recently drew protestors to Courthouse Park in Sonora in opposition to the plan. It can be viewed here.

Over 20 people voiced their opinions on the plan during the public hearing, with most opposed, citing water and fire concerns, including whether wood-burning stoves would not be allowed under the plan. A charge staff denied saying the document does not make any mandates. Others called for the plan to be more specific with more details on goals and action. However, staff noted that if it is more specific, that would require setting deadlines and mandates, something they tried to avoid, noting the need for this plan to be able to change in the future.

Board Chair Anaiah Kirk voiced concern that the board did not have enough time to discuss such a big issue, stating, “I can’t do it [approve the plan] in one stab” and was not opposed to having a special meeting on the plan. Staff pointed out that more discussion could result in additional fees from the consultant, possibly in the area of $25,000. District 4 Supervisor Kathleen Haff made it clear she did not want to spend more money on the consultant for this project. But with no consensus, the decision was made to meet with staff to go over the plan in the coming weeks. Then get an update on what recommendations came out of the meeting and whether to spend more money on the consultant.

“Keep it simple, stupid,” offered District 5 Supervisor Jaron Brandon. “How do we try to do this in a way that we don’t have to redraft all of the stuff? So, if we can find the most simple solution first, that might only take a few meetings and not delay these other projects. It might be there or we adopt something of this and add a couple of other things on.”

Noting that staff has been working on the plan for a year, District 2 Supervisor Ryan Campbell had this response: “This path that we are following is the least simple way we could be doing this, so I just want to highlight that. We have an opportunity to do something about it, and we’re choosing to punt. I just want to state the obvious here. This is not simple this path that we are going down.”