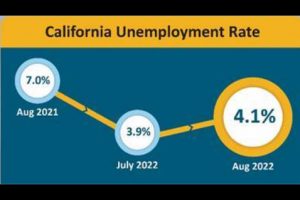 Sonora, CA – The state saw a slight increase in the unemployment rate for August, and the Mother Lode followed that trend.

The Employment Development Department (EDD) released its report on Friday, showing that in August there was a 0.2 percentage point gain. This is the first time since May of 2020 that the state’s jobless rate saw a month-over-month increase. The state has now regained 98.3 percent (2,711,600) of the 2,758,900 nonfarm jobs lost during March and April of 2020 due to the COVID-19 pandemic. Additionally, the EDD noted that August marked the 11th consecutive month of nonfarm job gains, which now totals a 690,000 job gain over that time period.

Seven of California’s 11 industry sectors gained jobs last month.  Leisure and hospitality saw the greatest gains, totaling 9,800, with the majority of them occurring in lodging. It was followed by Trade, Transportation, and Utilities with an increase of 6,000 and showed noticeable gains in the Retail subsector, with most of those gains occurring in Motor Vehicle and Parts Dealers, Food and Beverage Stores, and Health and Personal Care Stores, according to the EDD. The largest job losses were in information, with 3,800 jobs lost. The main reductions were in the motion picture and video industries, as well as data processing and hosting services.

The national jobless rate for the month of August was 4.1 percent.