Rolling Right Along To Another Win 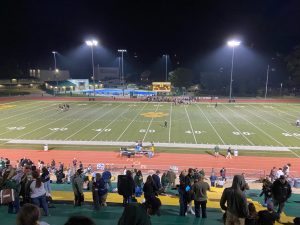 The Sonora Wildcats closed out the non-league portion of their schedule Friday night with a blowout 63-12 win over the visiting West Wolfpack.

The Wolfpack opened the game with a 35-yard pass on their first play from scrimmage that had an additional 15 yards tacked on for a Sonora penalty. The Wildcat defense stood firm, however, and forced a turnover on downs four plays later. It would be the closest West came to the end zone for the next three quarters. Starting at their own 35-yard line, Sonora moved quickly down the field and found the endzone on an 8-yard run from junior fullback Brandon Hensel, and the rout was on.

Sonora scored on every possession for the rest of the half, with more touchdowns coming from Hensel, senior running back Jack Teem, junior running back Bryce Nicholson, and senior wide receiver Chance Pimentel. Pimentel also contributed on defense, with two interceptions, one of which was returned for a touchdown. The Wildcats went into halftime sitting on a comfortable 56-0 lead.

Sonora would rest most of its starters for the second half. After another Hensel touchdown made it 63-0 Wildcats, West finally got on the board in the 4th quarter with a touchdown pass from senior quarterback Chris Inigo to senior wide receiver J’vaughn Nibbs. On the ensuing drive, a Wildcat fumble turned into a scoop and score, as the Wolfpack defense returned the ball 45 yards for a touchdown.

Brandon Hensel earned Chicken Ranch Casino Player of the Game honors for his 4-touchdown performance. The Wildcats head into the bye week with a 4-1 record on the season. The Wildcats have a bye week next Friday, with their next game at home versus Calaveras on 9/30.

In other action, the undefeated Summerville Bears (4-0) had the night off. Next Friday is the Bears’ homecoming game against Stone Ridge Christian. You can hear that game live on 93.5 KKBN. Bret Harte had its homecoming last night and beat the Millennium Charter Falcons 31-7. They have a bye week next week. Calaveras lost a Monday night game last week to the Ripon Indians, 49-12. Next Friday, they play at home against the Galt Warriors.