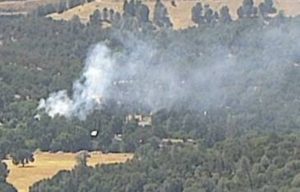 Fire in Jamestown off HWY 108 near Jamestown Road

Update at 1:15 p.m.: CAL Fire reports that ground crews have contained a grass fire that broke out behind the Dollar General Store on Highway 108 in Jamestown. The fire was estimated at a 20′ by 20′ spot. No structures were threatened and no injuries were reported. All aircraft have returned to the Columbia Air Attack Base. What ignited the blaze is under investigation.

Original post at 12:55 p.m.: Jamestown, CA – Air and ground resources are heading to a vegetation fire in Jamestown off Highway 108 and near Rawhide Road.

CAL Fire reports that the flames broke out behind the Dollar General Store in the 18300 block of Highway 108. A plume of smoke can be seen, but there are no fire activity details or word on whether any structures are threatened. An update will be provided as soon as new information comes into the newsroom.