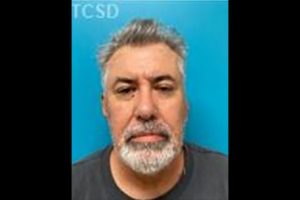 Sonora, CA — A woman claimed her ex-boyfriend was sending frightening messages and one of his electronic devices confirmed it.

The woman made the report to the Tuolumne Sheriff’s Office on Monday morning. She stated that her ex-boyfriend, 59-year-old Michael Anthony Guerrero of Sonora, was the sender of numerous threatening texts. She added that these messages had been sent over the past few days and she was “in fear for her life and the lives of her children.”

Deputies responded to Guerrero’s home to question him regarding the text. Sheriff’s spokesperson Sgt. Jacob Ostoich detailed, “The deputies were able to get a statement from Guerrero and gained consent to view his phone. Both Guerrero’s statement and phone supported the information provided by the reporting party.”

Guerrero was arrested on $25,000 bail for felony criminal threats with intent to terrorize.