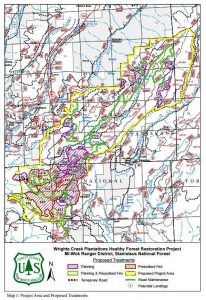 Sonora, CA — The Wrights Creek Plantation in the Mi-Wok Ranger District of the Stanislaus National Forest is moving forward with a plan to have vegetation and trees removed. The first timber sale opportunity was advertised on August 24, 2016 and according to U.S. Forest Service Spokesperson Kathryn Wilkinson “Implementation of the project can begin immediately.”

The area to be harvested is East of Highway 108 in the upper North Fork Tuolumne River and middle Clavey River watersheds (a map is here). Of the 2,394 acres, 1,200 acres will be thinned and 717 will be treated with prescribed burning, the rest will be treated with a mix of both. The project is named the Wrights Creek Plantations Healthy Forest Restoration (Wrights Creek HFR) and aims to promote tree and plant diversity and allow more moisture for the remaining healthy trees to repel insect infestations such as by the bark beetle. It is the first project in the Stanislaus National Forest under the Agriculture Act of 2014 (2014 Farm Bill).

The project is called unique because it takes a “proactive approach addressing the unprecedented tree mortality affecting the forests of the Sierra Nevada Mountains,” according to Wilkenson who adds, “Mortality due to drought and insect and disease has already begun within, and in the vicinity of, the project area.”

The Wrights Creek plantations are described as having many of the same type of small trees (Jeffrey and ponderosa pines) close together. A fourth consecutive year in drought “put the plantations at a particularly high risk of not only insect infestation and disease, but also stand-replacing wildfire,” says Wilkenson. The Forest Service’s announcement of the project also states the need for quick action.

According to Forest Service decision about this project in 1950 after the Wrights Creek Fire, the Forest Service conducted salvage logging and trees were planted. In the 1970’s the area was described as vulnerable to bark beetle outbreaks that caused uncharacteristically large pockets of mortality. In response to this mortality, the Forest Service once again conducted salvage logging. Over the following years, other small plantations were established following clear-cuts conducted in partially stocked stands with the intention of maximizing yield, but by the 1990’s, many of the plantations remained unthinned with dense understory brush vegetation: conditions synonymous with severe fire hazard potential. The decision also states the project falls within a category of actions that are excluded from documentation in an Environmental Assessment (EA) or an Environmental Impact Statement (EIS).

The U.S. Forest Service, part U.S. Department of Agriculture, has either a direct or indirect role in stewardship of about 80 percent of the 850 million forested acres within the U.S., of which 100 million acres are urban forests where most Americans live.