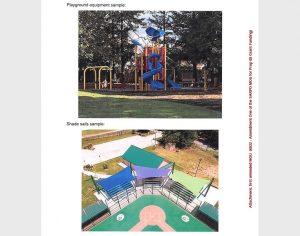 San Andreas, CA — The Calaveras County Board of Supervisors will meet on Tuesday to review a number of items.

Included are improvements proposed at Alex Quinones Park in San Andreas. The county is receiving $70,000 in Proposition 68 state grant money and the top project identified was replacing the fencing at the ballfield in the park. The San Andreas Recreation and Parks District received a construction bid much lower than an initial estimate (total cost of around $16,850), freeing up money for additional projects. The district is proposing a new pickleball court $23,000), new shade coverings over the dugouts ($10,000) and installing a playground that was purchased through district fundraising efforts ($20,000). The Calaveras Parks and Recreation Commission met last month and recommended that the project scope be expanded to include those additional items under the existing $70,000 grant allocation.

In addition, the board will vote on approving the purchase of a mobile billboard trailer for the Calaveras County Sheriff’s Office. It would initially be used to put up recruitment announcements, but it could also later be used to relay information about sheriff’s office programs and public safety announcements. The $14,000 for the mobile billboard trailer would come from contingency funding allocated from an Assembly Bill 443 Special Revenue Fund that helps offset capital equipment expenses.

The Supervisors will also hear an informational update on the county’s tree mortality program, and a presentation on the Calaveras County Permanent Local Housing Allocation Fund Program. The meeting starts at 9am, Tuesday, at the government center in San Andreas.