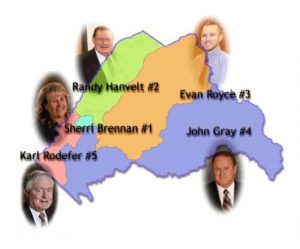 Sonora, CA — After earlier denying a proposed pay increase that would have spiked their pay by over $5,000, the Tuolumne County Board of Supervisors voted down a smaller proposed increase this morning.

On the table was to give a 2% cost of living adjustment increase, which would have bumped salaries up by about $700 to $40,490. A majority of the board concurred that the job’s salary is too low given the time commitment and requirements, but feel that an outside group needs to make salary decisions. During the discussion at the last meeting there were some on the board that expressed an openness to a smaller increase (2%), but when the time came today, there was no support. There were concerns raised in the past about the negative political ramifications of giving themselves a raise. CAO Craig Pedro will look into the possibility of handing the task of Supervisor pay over to the Grand Jury or potentially a citizen commission. If not, it would have to come back to the board. District Four Supervisor John Gray responded, “Obviously if you bring it back to us…we’re not going to be able to make a decision because we haven’t been able to in 10 years. So, there has to be another action than bringing it back to us.”

District Five Supervisor Karl Rodefer stated that he feels the current board is not in the job for the financial benefits, but indicated a salary increase would potentially improve the quality of future candidates. He said, “People out in the public are watching what it takes to do this job, and what the compensation for this job is does effect decisions on whether they want to run for this position or not run for this position. Having an unrealistically low and non-competitive wage scale for the position does limit the pool of people that either can or want to run for this position. It limits your choices when you go to the ballot box to vote for people that are going to make the decisions that affect your life.”

Today’s 2% proposal failed to gain a single motion so it died without a vote.