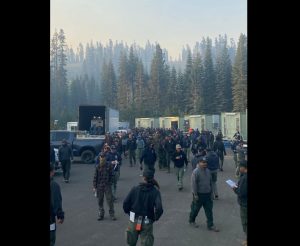 Command center for the Washburn Fire in Yosemite National Park

Park fire officials declared it 100% contained at 4,886 acres this morning, nearly a month since it started on July 7th, and threatened the Mariposa Grove of Giant Sequoias. The flames quickly swallowed up acreage and forced evacuations, including the community of Wawona, and shut down Highway 41, the south entrance to the park, and the grove, as earlier reported here.

Fire crews were able to beat back the flames and prevent serious damage to the giant trees. Yesterday morning, the grove reopened to the public, and shuttle service to it resumed. However, these trails are still closed:

*Visitors are asked to stay on trails as hazards may exist off trail.

Fire officials relayed that crews will continue to patrol the area until hot spots are out and there is no smoldering. A total of 35 firefighters remain on the scene. The fire is believed to have been human-caused, as detailed here, but the exact cause remains under investigation. Also, as earlier reported here, fire officials are still asking anyone that may have been in the area of the grove on July 7th and have information regarding the fire’s start to contact them at NPS Investigative Services Branch (ISB) (888) 653-0009 or email: nps_isb@nps.gov.