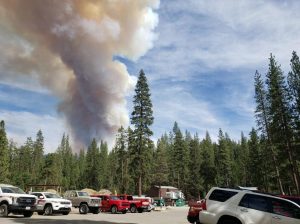 Yosemite, CA — The Washburn Fire in Yosemite has grown.

It is now up to 3,772 acres, as of this morning, and the containment has dropped from the earlier 22 percent down to 17 percent. Firefighters continue to face challenges due to the heat and topography. Fire officials do report success in protecting the Mariposa Grove of Giant Sequoias. Prescribed burning over the past decades has helped firefighters slow the spread and establish control lines in that area.

As for the cause of the fire, Yosemite Superintendent Cicily Muldoon says, “There was no lightning on that day, so it was a human start fire, and it is under investigation. That is all I can really say about it right now. We are looking at it, real, real, hard.”

The fire was located on July 7 near the Washburn Trail. Yosemite National Park remains open, however, there is no access via Wawona Road (Highway 41 extension). The park can only be accessed via Highway 120 or Highway 140.

Air and ground resources will continue to work on building control lines over the coming days.