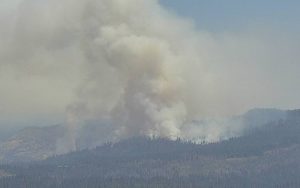 Update at 5:30 p.m.: The fire has jumped to 466 acres and has led to the mandatory evacuation of the Wawona community and Wawona Campground. Wawona Road(Highway 41) is closed from South Entrance to the Wawona Golf Course.

Calls started flooding into the Yosemite Emergency Communications Center just after 2 p.m. on Thursday, with callers reporting smoke visible from the lower Mariposa Grove area, near the Washburn trail. Fire officials detailed, “A full initial attack response was dispatched, including Yosemite Fire resources and cooperators. The Mariposa Grove was evacuated and is temporarily closed.”

The fire has been dubbed the “Washburn Fire” with mapping from last night putting the acreage at 46 acres. Overnight, the flames remained active. This morning, the acreage is estimated to be around 250 acres.

Park fire officials state, “All areas in Wawona should prepare for potential evacuation as this incident may require evacuation in the future.” Residents and visitors are encouraged to make appropriate preparations.”

It is unclear if any of the giant trees have burned or been damaged by the flames. What ignited the blaze is under investigation. The rest of the park remains open to visitors.