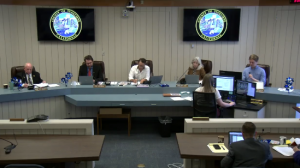 Sonora, CA — The Tuolumne County Board of Supervisors narrowly approved the final reading of an ordinance Tuesday to send a one-cent sales tax increase to the November General Election ballot.

At a previous meeting, the first reading of the ordinance was approved 5-0, but it required another reading/vote.

District Four Supervisor Kathleen Haff, who earlier voted yes, indicated success in November would require strong community support from groups who would benefit. Haff said, “Until, and unless, we have community champions for what our county needs, there is no reason to do this. It has been a month. We have no community champions. No one from the DSA (Deputy Sheriff’s Association), nobody from the fire union, and nobody from the roads union.”

Supervisors David Goldemberg, Ryan Campbell and Jaron Brandon were all still strongly in support of moving the measure forward, but also acknowledging the challenges it may face. Supervisor Anaiah Kirk indicated that he had reservations about the tax measure, but stated he often hears concerns in the community about fire, law enforcement and roads, and would like the public to decide whether or not to approve it.

It narrowly received a 4/5 majority vote required by the board to move it forward to the ballot.

The increase 1-cent increase would have a 10-year sunset clause and only impact sales in the unincorporated parts of the city (outside of Sonora).

Click here to read an earlier story about a similar sales tax measure proposed in the City of Sonora.

Tuolumne County’s tax measure will be more challenging to pass, percentage-wise. It has to do with the way state law is set up. Because the county money will go to specific areas (fire, roads and sheriff) it would require 2/3 support. The City of Sonora’s tax is more generic and can be spent where the council deems is the best fit, so it only requires a simple majority in support. The county leaders chose their strategy because they feel it may have a better chance of being approved if voters know it will go to those three areas of high need.