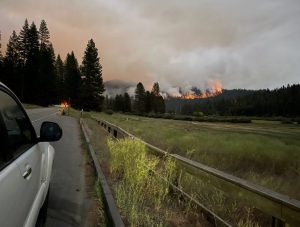 Update at 7:47pm: A wildfire burning near the Washburn Trail in the Mariposa Grove of Giant Sequoias is now 2,720 acres and there is 22-percent containment.

Crews fighting the Washburn Fire were challenged today by hot temperatures and the difficult terrain. Firefighters will continue to work toward building additional control lines overnight.

Original story posted at 8:20am: Yosemite, CA — A fire burning in the area of the Mariposa Grove of Giant Sequoias is up to 2,340 acres, and no containment has been reported yet.

The fire was first located during the afternoon of July 7 near the Washburn Trail and the cause remains under investigation. Yosemite officials have been proactively protecting the Mariposa Grove by deploying sprinkler systems around the trees to increase the humidity near the fire. They are also putting fire-resistant wrapping around historic structures located within the grove. The fire is putting up drift smoke into surrounding communities as it is burning in many heavy dead and dry fuels.

The hot temperatures posed challenges for firefighters yesterday, and the warming trend will continue through the week.

The Wawona Road (Highway 41 extension) is closed from the south entrance of the park to Henness Ridge Road. The Mariposa Grove remains closed until further notice.

A Washburn Fire informational meeting will take place this evening (July 11) at 7pm at the Oakhurst Community Center at 39800 Fresno Flats Road.