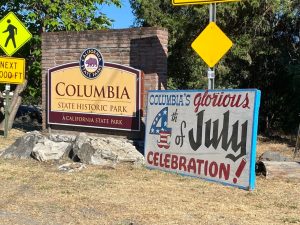 Columbia, CA — There are numerous ways to celebrate Independence Day in the Mother Lode.

One of the biggest events is the annual Glorious Fourth of July Celebration put on by the Columbia Chamber of Commerce at Columbia State Historic Park. The festivities begin at 11am with a flag-raising ceremony and the firing of the black powder muskets by the Columbia Foot Dragoons. The parade starts at noon. This year’s Grand Marshal is Roger Kirby. There will also be a band concert, and contests like greased pole climbing, nail pounding, watermelon and pie eating, a cake walk, egg relay race, and a five-way tug-of-war.

Also taking place today is a Fourth of July Party in the Park in Rocca Park in Jamestown. It is put on by the Jamestown Promotion Club and will run from 11am-9:30pm. Four bands will be performing and there will be various food items for purchase.

The Mokelumne Hill Fourth of July Parade and Celebration begins with a Veterans Memorial breakfast this morning at 7:30am in downtown and the parade gets underway at 11.

Numerous Independence Day Celebrations took place over the weekend as well, including the parade Saturday morning in Arnold and the popular fireworks display Saturday evening at Ironstone Vineyards in Murphys. There was also a celebration Sunday at the Copperopolis Town Square.