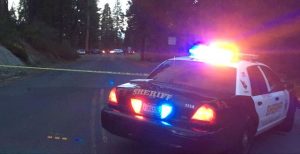 Pinecrest, CA — Tuolumne County Sheriff’s reports it has combed the area and is actively investigating the found remains.

As reported last week, a resident found the human remains on Thursday in Pinecrest in the area of Highway 108 near Old Strawberry Road around 6 p.m.  Investigators reveal that they conducted a search of the area and found no evidence to suggest a cause of death or the identity of the person. Additionally, detectives report they have been able to rule out any connection to several local missing person cases, while actively working to determine if there is a connection to any other cases. However, the names of those individuals who have been eliminated from the list are not being released pending notification of family. Sgt. Andrea Benson indicates, “Rather than cause speculation as to who it may be, they want to wait until they confirm identity of the remains to make the determination.”

Sgt. Benson says that the remains have been sent to the department of justice for forensic and DNA testing, a process that could take several weeks to complete. She notes further updates will be released when more information is confirmed and available.