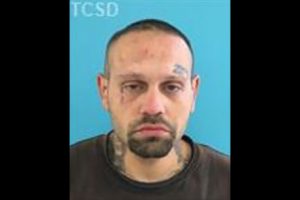 Jamestown, CA – A stolen purse and cell phone escalated to a foot chase with deputies near a Jamestown bar.

A victim reported the theft to the Tuolumne Sheriff’s Dispatch around 8:30 p.m. last Thursday, adding that those items totaled over $1,900. An hour later, the same woman called to say the responsible male was outside the Rawhide Saloon, off Highway 108 in Jamestown.

When deputies arrived, they spotted a man matching the description nearby and confronted him. He took off running but was apprehended quickly. The suspect was identified as 30-year-old Jesse Newton, who had multiple felony and misdemeanor warrants out for his arrest.

A search of Newton turned up drug paraphernalia and cash. Sheriff’s spokesperson Ashley Boujikian detailed, “Newton admitted he had taken the money from the stolen purse. Through further investigation, deputies were able to recover the victim’s cell phone hidden in a tree near Rocca Park.”