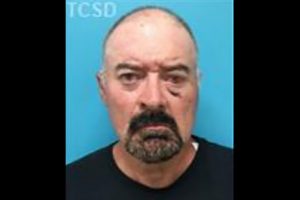 Sonora, CA – An investigation into two license plates that did not belong on a pick-up revealed the truck was stolen from a local dealership.

The evidence was collected over a two-day period last week, resulting in the arrest of 60-year-old Douglas Shults. He was originally arrested on Sunday, May 22nd, when the truck he was driving had two license plates attached to it. A check of each showed one was reported stolen, and neither plate belonged to the truck.

“Efforts were made to contact the truck’s owner to determine if the truck had been stolen but not yet reported as stolen, but the owner of the truck was not able to be contacted,” relayed Sheriff’s officials. Shults was arrested for possession of the stolen property and displaying a false vehicle registration, and the truck was towed.

The next day, on Monday, a deputy conducting a follow-up investigation determined the truck had been stolen from the Sonora Chrysler Dodge Jeep Ram (CDJR) on Mono Way in Sonora but had not yet been reported as stolen. Then, around 5:30 p.m. that same day, Shults walked into the sheriff’s office wanting to retrieve items left in the stolen truck. After questioning, he admitted to the deputy that he had stolen the truck from the CDJR parking lot. Shults was taken into custody for felony theft of a vehicle.