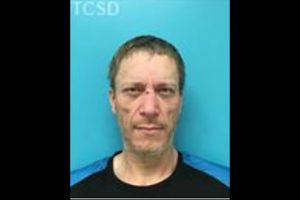 Groveland, CA – A Groveland man is accused of breaking several windows, among other items, of a relative.

When Tuolumne Sheriff’s Deputies arrived at a property in the area of Powder House Street off Highway 120 in Groveland around 2 p.m. on Friday for a report of vandalism, the suspects had already left the scene. The victim told deputies that he and his relative, 49-year-old Jamy Gray, got into an argument. He stated that Gray had broken out the rear window of a vehicle at the residence. The victim added that throughout the past week, Gray had shattered several windows and damaged doors in his residence, as well as broken a BBQ. Sheriff’s officials noted that the estimated cost of the damage totaled over $6,000.

Gray was spotted on foot a short distance away from the scene and was handcuffed. A search of his backpack uncovered drug use paraphernalia. Gray was arrested for felony vandalism and possession of controlled substance paraphernalia. He was placed on a $10,000 bail.