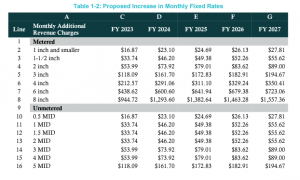 Sonora, CA — The Tuolumne Utilities District Board of Directors will discuss a study looking at how much rates must go up to acquire PG&E infrastructure, like the Tuolumne Main Canal, Lyons Reservoir and Pinecrest Dam.

The study, put together by the outside firm Raftelis, will be reviewed at Tuesday’s TUD meeting which starts at 9am. We reported earlier that District General Manager Don Perkins announced this month that it would initially cost most residential ratepayers, on average, about $200 a year.

It equates to around $16 extra per month.

In total, the district must raise about $4.5-million, annually, in the coming years, to acquire and maintain the infrastructure.

District officials have called the acquisition of the infrastructure and related water rights a “once in a lifetime opportunity.”

Immediately after reviewing the study, the board will vote on issuing a 218 notice to ratepayers, which is a state legal requirement when raising rates.

A public hearing would then be held on July 19 at 9am to formally vote on increasing the rates, as proposed.

If approved, the new rate structure would then take effect this coming September.