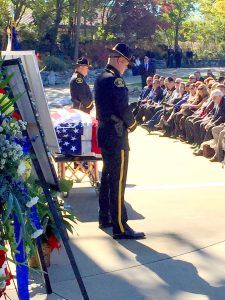 As previously reported, Sheriff Kuntz’s sudden death by heart attack late last October rocked the community, as he was only 63 and less than a year into his second four-year term. (For more on Kuntz’s life, click here.) “We tried everything we could to make the choice be through [special] election,” Calaveras County Board of Supervisors Chair Cliff Edson sighs. However, after much research, County Counsel Megan Stedtfeld determined that, since Sheriff Kuntz had already begun serving a term that was scheduled to complete during the next general election in 2018, the supervisors are legally bound to make a timely appointment. Although they might have simply preferred to name Capt. Jim Macedo, who is now temporarily discharging the sheriff’s duties, that is not a legal option either, according to Edson, as the captain does not live within Calaveras County.

As the board has not ever had to appoint a new sheriff before, Edson admits that it is hard for him to determine a timeline. Ahead of screening candidates through county processes, he shares that staff is working to assemble a “vetting group” of retired and active sheriffs from other areas similar in nature, but not connected to Calaveras County, to review the applications. “We want to make it absolutely fair,” Edson emphasizes, guesstimating that it might take “four months or so,” before an appointment is finally made, all to help ensure that county citizens get “the very best possible sheriff the board can appoint.” The process, he says, will include the supervisors interviewing the final candidates at a public meeting.

In addition to meeting all of the other professional requirements necessary to run for sheriff, the supervisors have set two additional parameters for those who might apply for Sheriff Kuntz’s position: they must be current residents of Calaveras County and registered voters. “That narrows it down quite a bit, actually, ” he says wryly. “We are lucky…we have a couple of very good prospects,” he states, noting that Capt. Ed Ballard and Sgt. Rick DiBasilio, both currently working at the county sheriff’s office, have already thrown their hats into the ring.

“They are very good deputies…we are fortunate to have such good, qualified people in our county,” Edson states. Too, he adds, “It may end up that another deputy may step forward, so…we just want to give every opportunity to get the best possible choice within our county.”