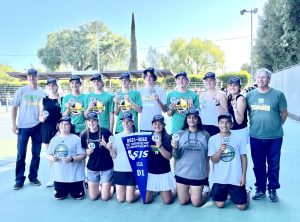 2022 proved to be a record-breaking year for the Sonora High Tennis team.

The co-ed team, consisting of seven boys and seven girls finished with a record of 13-2 (8-2 MLL) and were champions of the Mother Lode League.

The team went into the Division One Co-Ed Playoffs as the #6 seed and hosted the #11 seeded Galt High on May 5th at Columbia College.  The Wildcats beat Galt 8-1 and advanced to play the number three seed, Hughson High, on May 9th.  SHS traveled to Hughson and upset the Huskies 6-3.  With that win, the team traveled to Gustine on May 11th to take on the #2 seed Orestimba High in the semi-finals.  The Wildcats again upset the higher seed 6-3 to advance to the section championship at Oak Park in Stockton on May 13th.

It was only the 3rd time in school history that the tennis team advanced to the Sac-Joaquin Section Championship match.  In the finals, SHS faced the #4 seed, Riverbank High, who previously knocked the Wildcats out of the playoffs in 2019.  It was a hard fought match with multiple 3-set duals and the Wildcats prevailed 6-3 for the first overall tennis Section Title in school history (Joel Lawson won the boys individual section title in 1996).

The team was led by four standout juniors who each were named to the All Mother Lode League first team: Luke Wheeler, Lauren Hughes, Jack Conte, and Nathin Dean.  The #1 girls doubles team of Gracie Bearden/Kimberly Milnik and #2 doubles team of Ella Wolken/Ava Holland both went undefeated in the playoffs.  Sophomore Ava Holland also finished the 2022 season without a loss!  Other members of the championship team include Michael Evans, Alex King, Caleb Marfil, Aidan Smith, and seniors Danielle Insilan and Nandini Shah.

Coaches Sam Segerstrom and Jeff Fitzwater rave about the team they had the pleasure of coaching.  So much has to go right to win a section championship and these kids earned it with great attitudes, dedication, and hard work.  They showed heart in every match and every player contributed towards the championship.  The team is believed to be the first team in any sport to win a Sac-Joaquin Section Title without on-campus facilities.  The team is forever grateful to Columbia College for being able to use their tennis courts.