To Increase Or Decrease Defense Spending 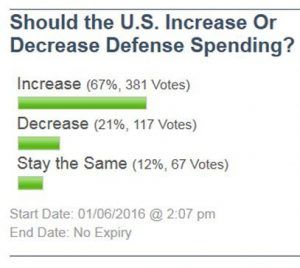 The results of a two day informal myMotherlode poll asking “Should the U.S. increase or decrease defense spending?” was a majority, 67 percent, in favor of an increase.

The defense department reports it is the nation’s largest employer; headed by Secretary of Defense Ash Carter, it employs a civilian force of over 1.3 million men and women on active duty, 742,000 civilian personnel, and 826,000 in the National Guard and Reserve forces. In addition more than 2 million military retirees and their family members receive benefits.

The number of personnel employed by the Department of Defense has declined since the 1960s, while personnel costs have risen rapidly, in part due to rising U.S. health-care costs. The 2016 budget request from the defense department comptroller says “Personnel costs, including military pay and allowances, military health care, civilian pay, and family support, encompass nearly half of the Department’s budget.” And concludes, “The Department provides a strong package of pay and benefits that is balanced with readiness, capacity, and the capabilities needed to execute the national defense strategy.”

The budget request also states, “The Department is wasting scarce defense resources on maintaining facilities that far exceed DoD’s needs. The Congress must provide the Department with the authority to pursue another Base Realignment and Closure round beginning in fiscal year 2017. As the Department draws down to a smaller, more capable, agile force, it must eliminate all areas of waste to include maintaining unneeded facilities.”

The full report is here.