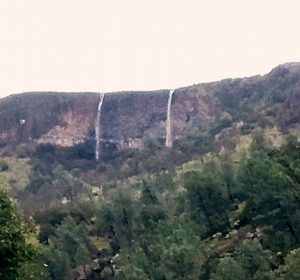 Sacramento, CA — State water officials are keeping their light sabers sheathed despite the latest wallop of wet winter weather that has inspired the nickname “Darth Nino.”

On Tuesday, an Associate Press story reported that Deputy Director of the Climate Prediction Center Mike Halpert noted the initial data for October through December nearly mirrors the figures for the same time period logged back in 1997, the strongest El Nino year since 1950, when records began being kept. Meteorologists measure El Nino based on how parts of the central Pacific warm over periods of three consecutive months. Weather Underground meteorology director Jeff Masters subsequently quipped, “Darth Nino may finally have California in its sights.”

While California Dept. of Water Resources (DWR) spokesperson Ted Thomas is all for the weather forces that be to relieve the state’s critical drought conditions that are now in their fifth year, he states, “Ideally, we will get good precipitation with a few days between storm events, so that we do not over-top our streams and get into a major flood situation.”

Cautiously optimistic, is how Thomas describes his department’s current attitude. “We don’t know how [the weather] is going to play out over the next month or beyond.” He adds, “At this point, we are tracking right about normal — where we should be at this time of year, both in snowpack accululation and in rainfall.” However, he points out, the state is still dealing with critically low reservoir storage. He cites that Lake Shasta, now at 32 percent of capacity, is at 51 percent of its historic level for this time of year; Lake Oroville in Butte County, at 29 percent of capacity, is at 47 percent of its average for today’s date.

Furthermore, Thomas states, “The rainfall and snowpack so far are at or slightly above normal at the historical average. To put a major dent in this four-year drought now going into its fifth year, we need to keep this good precipitation coming through the winter months into early spring.” He recalls how, last April, Governor Jerry Brown showed up to stand on bare ground in the Sierra during one of the DWR snow measurement surveys. “We lost the snowpack and when we do that we lose about 30 percent of the water that we use in California,” he says, matter-of-factly. So he is far from ready to give this El Nino year villain — or hero — status yet.

“We know that weather can turn either way on a dime,” Thomas warns. “We have seen this time of year start very wet and suddenly turn very dry, so we are…cautiously optimistic.”