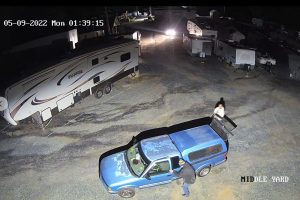 Tuolumne County Sheriff’s officials now believe that this incident and these suspects, a white and black male, could be connected to a similar theft at a local school. The video in the image box shows a citizen trying to box in the suspects’ getaway car, which backs up and speeds away from the scene. Investigators detailed, “Early Monday morning, a local citizen scared off two suspects caught in the act of trying to steal a catalytic converter from an RV.”

Two days later, on Wednesday, May 4th, during the early morning hours, thieves were able to get their hands on the smog reducing device. Sheriff’s officials disclosed, “Two suspects successfully stole a catalytic converter from a local elementary school’s transport vehicle. We think the two events could be linked.”

The exact locations of these incidents were not identified by investigators. The public is now being asked to view the video and keep an eye out for this truck driven by the suspects in the attempted theft. Anyone recognizing it or the suspects is asked to call the sheriff’s communications center at 209-533-5815.