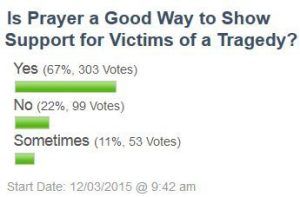 An informal myMotherLode poll asked: Is Prayer a Good Way to Show Support for Victims of a Tragedy? The result was 67 percent Yes, an additional 11 percent selected Sometimes, and 22 percent selected No. The one day poll, following the mass shooting that killed 14 and wounded 21 others in San Bernardino, received 455 votes.

Governor Jerry Brown’s public statement regarding San Bernardino stated “Our thoughts and prayers are with the victims’ families and everyone affected by the brutal attack.” After attacks in France several buildings and monuments were lit up with the colors of the French flag to show support. Other respectful displays are lowering flags to half staff, being extra attentive and kind to others, donating to charity and blood banks and contributing money in support of law enforcement. Of note is the fact that San Bernardino and Stockton are the only cities in California so far to declare bankruptcy.

Politicians mostly Democrats including President Obama, advocate increasing gun regulation saying, “Thoughts and prayers,” are not enough to prevent or deter future attacks. Politically they call for action, ignoring the question if sharing prayers itself is an action that supports and helps victims and communities.

U.S. Senator Chris Murphy, of Connecticut where the Sandy Hook shooting happened, stated on Twitter: “Your “thoughts” should be about steps to take to stop this carnage. Your “prayers” should be for forgiveness if you do nothing – again.” California Senator Dianne Feinstein also said “Congress has been paralyzed by the gun lobby for years, while more and more Americans are killed in mass shootings. The carnage won’t stop until Congress finds the courage to stand up to the gun lobby and protect the nation.”

Sen. Feinstein offered an amendment to allow the attorney general with a “reasonable belief” to prevent someone from buying a gun if that person is a known or suspected terrorist that would use it in connection with a terrorist act. On December 3rd Republican senators voted in favor of a measure to allow the Department of Justice to issue a 72 hour injunction against someone on the terror watch list seeking to purchase a gun. But if the injunction doesn’t go through, the gun sale could go forward.

Republican Senators voted against all other proposed gun legislation on the same day, with all four Republican senators running for president — Marco Rubio (R-Fla.), Ted Cruz (R-Texas), Rand Paul (R-Kentucky) and Lindsey Graham (R-S.C.) — voting against limits to gun ownership. All democrats except one voted for it including Democratic Presidential candidate Bernie Sanders.