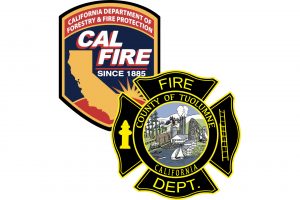 The flames broke out in a double-wide mobile home in the 17700 block of Woods Way in Jamestown. According to CAL Fire spokesperson Emily Kilgore, when crews arrived, the trailer was 50% involved, with flames shooting out of the residence. Firefighters were able to contain the blaze in about half an hour. No injuries were reported, but Kilgore added that one occupant and two pets were displaced, and the Red Cross was called in to help them.