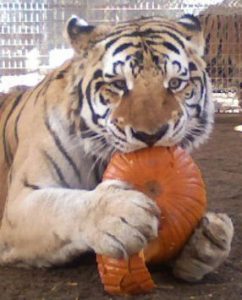 San Andreas, CA – A “battle-scarred” tiger who enjoyed over a decade of safe refuge in the Mother Lode has passed away, according to the Performing Animal Welfare Society (PAWS).

According to PAWS officials, Willie, whose estimated age was 19, was one of 39 tigers saved from a now defunct southern California roadside zoo back in 2004 during what PAWS calls what remains the largest single rescue operation of big cats in the US. When the southern California facility was closed down by the California Department of Fish and Game in 2004 for its deplorable conditions, the agency reported that it found more than 90 dead tigers on the property, along with numerous other injured, sick, and starving animals. (For a video detailing the rescue of “the Colton tigers,” click here.) PAWS staff points to the rescue as life-changing for the refuge; as many of the big cats had suffered years of neglect and abuse, they came with numerous health problems requiring focused care.

While, earlier this year, Willie’s keepers noticed signs of kidney disease, which is common in older wild and domestic cats, he reportedly responded well to an elevated care regimen. However, when it became apparent that his medications were no longer helping, the decision was made to humanely euthanize him last Wednesday, Nov. 18. Considered one of the biggest and toughest adult tigers of the group, Willie, when he arrived at PAWS, bore numerous fight scars and had suffered damage to his right eye. Responding well to his new environment and attentive care, staff described him as “well-loved,” with preferences for naps in the tall grass, cool water mistings on hot summer days — and pumpkins, which are provided as play treats right around this time of year. His keepers say they miss his regal presence, beautiful “chuff” greetings and great strength of character.

PAWS Holiday Open House, a fundraiser for the refuge, will run from 11 a.m. until 2 p.m. on Saturday, Dec. 12. Those interested in attending should know that tickets are only available in advance through Thursday, Dec. 10. For details, call the office weekdays at 209 745-2606.