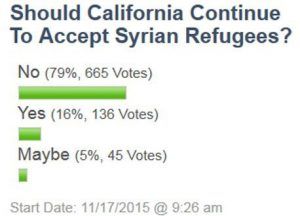 An informal myMotherLode poll records 79 percent do not think California should continue to accept Syrian refugees. The remaining 21% represent 16% in support and 5% maybe.

Arrival data provided to the Refugee Programs Bureau (RPB) by the U.S. Department of State reports from October 1, 2010 through September 30, 2014 a total of 31,221 refugees moved to California. The refugees are defined as from Afghanistan, Iran, Iraq, the Former USSR, SE Asia, Africa and 1,193 ‘Other’ countries.

Tuolumne and 26 other counties in California including Calaveras, Amador, Alpine and Mariposa did not record any refugee arrivals in the past 4 years and only 7 of California’s 58 counties recorded over 1,000 refugees. Stanislaus had 1,093 refugees or 5% of the total, Sacramento had 10%, Los Angeles 24%, and Santa Clara had the most 44% of the total over the four years.

As noted Tuesday morning November 17, Governor Jerry Brown remains in support of President Obama’s plan to admit 10,000 Syrian refugees over the next year.

Six days after the Paris attacks on Thursday, November 19, the U.S. House voted 289-137 to require FBI background checks of refugees from Iraq and Syria and tighter entry restrictions. Local representative Tom McClintock and Modesto Rep. Jeff Denham and all Republicans, except two, were joined by 47 Democrats in backing the bill. President Obama says he will veto it but first the Senate has to address the issue and it is unclear when, or even if it will. The associated press says it is possible senators will focus on the visa waiver program which allows people from 38 countries to enter the U.S. for short stays.

The Obama administration also asked the Supreme Court on Friday November 20, for an “immediate review” on its plans to shield some from deportation and give them work permits. The awaited decision is expected to affect as many as 5 million immigrants living in the country illegally many who are the parents of American citizens and lawful permanent residents.

Related to another Supreme Court case was last weekend’s informal poll, “Freezing Assets Before a Trial: Ok Even if it Limits Funds to Hire a Lawyer?” (69% No, 31% Yes) relates to a case involving Sila Luis, an owner of Miami home health care companies, who is accused of Medicare fraud. The case argues allowing federal prosecutors to put a hold on $45 million in assets deprives her of her sixth amendment right to hire a defense attorney of her choice. The Supreme court has yet to come to a verdict but, according to the Associated Press, they seemed troubled that a defendant could simply spend money tied to a crime leaving the government with nothing to recover if there is a conviction.