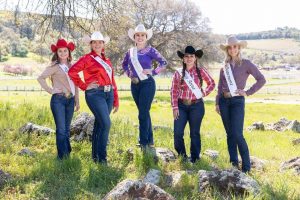 Jamestown, CA — A couple of the big events leading up to this weekend’s Mother Lode Roundup will get underway at five o’clock this evening at the Sheriff’s Posse grounds in Jamestown.

This year the Calcutta is being combined with the Queen Coronation.

Detailing the Calcutta portion, Posse member Dan Durnall states, “The calf scramble teams parade themselves up and down the alley, and would be bidders buy them, for the place that they will end up in the competition. We set some of the money aside for a very successful scholarship program that we have had over the years. It is really a great event for the locals to come out, and bid, and have some fun.”

Typically, the queen coronation ceremony is on the Sunday before the Roundup, but organizers decided to combine it this year with the Calcutta. This year’s queen contestants are Kyndal Castle, Beaumont Cook, Macy Anne Liotta and Katelyn Rumsey.

Since the Roundup was cancelled over the past two years due to COVID, Rayna Rogers has been serving as queen since 2019. General Chairman, Audie Archer, says, “She is the only queen we have ever had that long. She hung in there and still went to different rodeos and parades (representing the Roundup).

Tonight’s activities are the final ones ahead of Saturday’s 10 o’clock parade in downtown Sonora.

More details about the roundup, including a schedule of events, can be found here.