Allowing Cannabis Dispensaries and Cultivation Not On Ballot 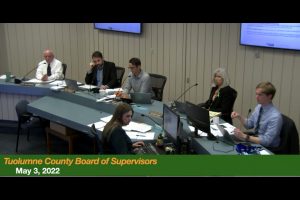 Tuolumne County Board of Supervisors May 3rd meeting

Sonora, CA – Whether or not to put an advisory measure on the November ballot to get citizens’ feedback about potentially allowing, and taxing, cannabis cultivation and dispensaries failed to get approval from Tuolumne Supervisors.

More than 30 individuals spoke at the public hearing on the issue. A majority, all but four, were against the measure, raising concerns about crime, dangers to children, and a poor investment of tax dollars. Even Tuolumne County Sheriff Bill Pooley interjected that it is “too expensive and never pays for itself” with the youth paying the price.

The handful of proponents countered that it brings added revenue in the form of jobs and taxes, which allows for more safety measures like hiring more law enforcement. The owner of the Hazy Bulldog also handed in a petition in favor of the measure, signed by 2,000 residents.

District 3 Supervisor Anaiah Kirk sided with those opposed to the measure. Regarding dispensaries, he stated, “You can buy pot locally. Jurisdictionally, you don’t need dispensaries because you can order it online and they’ll deliver because they do daily weekly drops.” Kirk also noted cultivation issues, explaining, “This comes from CSAC, (California State Association of Counties): ‘California state and local governments have licensed a far greater number of supply versus demand cannabis businesses.’ So, there is a huge supply and demand issue, way too much on the market.”

District 5 Supervisor Jaron Brandon explained why he wanted the board to look at this issue again. “I just look at a recreation program that right now because of compensation and hiring is struggling to find enough people to work at Standard Park. I look at the pay gap. We gave a big increase to deputies last year. And how we’re going to pay for that and the continuance of that. We do have huge staffing issues, and this was one of the things that I was exploring for revenue.”

The supervisors nixed the idea with a 3 to 2 vote. Those opposed were Kirk, Dist. 2 Ryan Campbell and Dist. 4 Kathleen Haff. Those in favor were Brandon and Dist. 1 David Goldemberg.