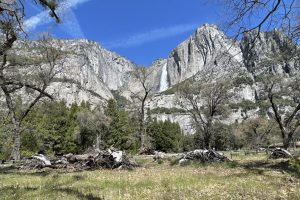 Yosemite, CA – Smoke may be visible in the skies above Yosemite National Park next week.

The woodpiles will be set ablaze during daylight hours near the Yosemite Elementary School, beginning Monday, May 3, and running through Friday, May 6th. Park Fire Management relayed that burn days will be determined by the best smoke dispersion and weather parameters. The piles, seen in the image box photo, were constructed by the Calaveras Healthy Impact Product Solutions (CHIPS) crew, made up of local tribal members. The goal is to restore California black oak groves in the Yosemite Valley.