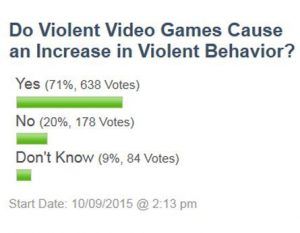 A recent informal myMotherLode poll asked “Do Violent Video Games Cause an Increase in Violent Behavior?” The results were: 71% Yes, 20% No and 9% Don’t Know.

In an October 9th news story Sonora Police Chief Mark Stinson was asked if violent virtual games play a big role in mass shooting incidents. Stinson said, “I have attended some training on school shootings and that seems to be the theme…the violent games that these kids are playing…they are becoming detached to actual death…kind of removing themselves…shooting people on video screens. So, they go out and act on these types of things…they’ve removed themselves [from reality] and are…actually playing the game in real life.” More from Chief Stinson is in the news story “Chief Stinson Comments On Sonora High Death Threat” here.

In August the American Psychological Association (APA) released a comprehensive review of 170 research articles and states there is evidence showing violent video games increase aggression but not enough to demonstrate that playing the games leads to criminal behavior or delinquency. The APA reported there is evidence to support that playing violent games decreases prosocial behavior, empathy and sensitivity to aggression. The APA resolved to educate the public about the effect, more details are in their resolution here.

The Centers for Disease Control and Prevention says “Research on youth violence has helped us better understand the factors that make some youth more likely to commit violent acts. Such risk factors increase the likelihood that a young person will become violent, but they might not be the direct cause of youth or school violence.” The CDC’s list of youth violence risk factors and protective factors is here.