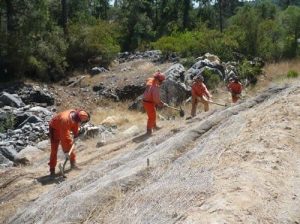 Sacramento, CA — A plan to put violent inmates on the fire line has been extinguished by state corrections officials after it drew recent national attention regarding safety concerns.

The plan sparked outrage from critics who argued it was a dangerous move. One of the groups vocal in their opposition was the union representing state firefighters who oversee the inmates while battling blazes. However, the plan has not been entirely scrapped, according to correction officials, who still plan to expand the inmate’s time served requirement to include prisoners with seven years left on their sentence, instead of the current five years that are needed to serve on the fire line.

The original plan was devised as a way to combat the lingering four-year drought that has brought a deadly fire season to the state.  As Cal Fire continually searches for ways to increase the pool of potential firefighters, the number of eligable inamtes has been falling in recent years due to AB109 forcing lower-level offenders to be sent to county jails instead of state prisons.