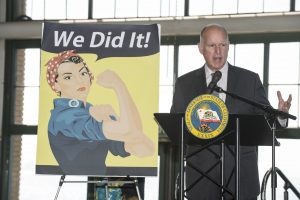 Sacramento, CA – New legislation gives women a new tool to fight the gender wage gap that according to the most recent figures show a woman getting on average 84 cents to a man’s dollar in the state.

Today, Governor Jerry Brown signed SB 358, which affords women in the state the powerful equal-pay protection in the nation. “Sixty-six years after passage of the California Equal Pay Act, many women still earn less money than men doing the same or similar work,” said Governor Brown. “This bill is another step toward closing the persistent wage gap between men and women.”

As previously reported, the state senate unanimously passed the bill in September. The legislation was authored by Democratic Senator Hannah-Beth Jackson of Santa Barbara and lets women question, without retaliation, alleged pay discrimination based on the wages a company pays to other employees who do substantially similar work. Jackson comments that families rely on women’s income more than ever before. She says, “Today is a momentous day for California, and it is long overdue. Equal pay isn’t just the right thing for women, it’s the right thing for our economy and for California.”

Additionally, the new law puts the burden on employers to prove a man’s higher pay is based on factors other than gender. The legislation got broad support from both parties. Brown is also looking at legislation that bars employers from using previous salary information as justification for paying women less than male co-workers.