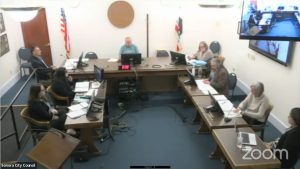 The group was created in response to local and national Black Lives Matter protests.

Similar to recent meetings where the issue was discussed, there were numerous community members who voiced opinions both for and against it.

In the end, the vote was 3-2 in support of passing the resolution, with councilmembers Colette Such, Jim Garaventa and Ann Segerstrom in favor, and Mark Plummer and Matt Hawkins in opposition.

You can read the resolution by clicking here.

Immediately after, the council voted 3-1-1 to dissolve the committee as a city-sponsored group. Councilmembers Garaventa, Plummer and Hawkins were in favor, Councilwoman Such was opposed, and councilwoman Segerstrom abstained.