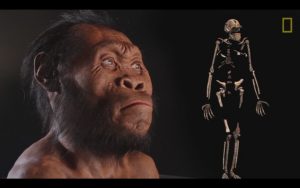 Sonora, CA — Modesto Anthropology Professor, Dr. Debra Bolter, of Sonora contributed to research released today documenting a new species of human relative. The species, which has been named naledi, has been classified in the grouping, or genus, Homo, the same as modern humans.

Partial skeletons of fifteen individuals have been identified so far, from remains discovered within the Dinaledi Chamber of the Rising Star cave system in the Cradle of Humankind, South Africa. The discovery will be featured as the cover story of National Geographic magazine’s October 2015 issue and in the NOVA/National Geographic Special, “Dawn of Humanity,” September 16th.

An international team of scientists took part in the research led by Prof Lee Berger. Dr. Bolter. The fossils were analyzed by Dr. Bolter in May 2014. According to the press release more than 50 experienced scientists and earlycareer researchers came together to study and analyze the fossils and to compose scientific papers. Dr. Bolter’s area of expertise is primate growth and development, applied to behavioral and social science models.  She reports she has spent months writing and documenting her work. Dr. Bolter says, “It is exciting.” She is a Columbia Elementary, Sonora High School and University of California, Santa Cruz graduate.

Dr. Bolter says, “The interesting thing about the Rising Star [Cave] is that infants and juveniles could not have got [where the fossils were found] on their own. They would have to be carried and no other [animal] remains were found there.” The press release about the research notes that six women were selected as “underground astronauts” from a global pool of candidates after a call on social media for experienced scientist/cavers who could fit through the 18-centimeter(7-inch)-wide cave opening.  Bolter was not one of the six but she noted the bones are in the dark zone of the cave, meaning no natural light is available to see. The study notes the remains appear to have been intentionally placed bodies of dead, a ritual previously thought as limited to modern humans.

The research was supported by Wits University, the National Geographic Society and South African DST/NRF. Ongoing exploration and conservation of the Rising Star site is supported by the Lyda Hill Foundation.