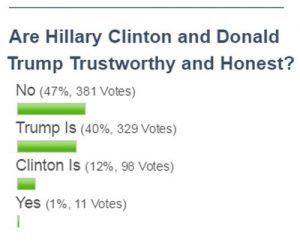 In March, before Clinton announced her plans to run, the question “Does ‘Honest’ Describe Hillary Clinton?” Was asked with 80 percent responding ‘No.’

The results of a related poll asked from August 12th to August 18th about the best candidate to handle the economy had Trump with 49 percent, ‘Other’ with 37 percent and just 14 percent for Clinton.

Trump is leading the GOP presidential primary race, and in Florida he even leads against former Florida Governor Jeb Bush. Trump has 21 percent of the Republican’s support compared to Bush’s 17 percent, according to a Quinnipiac University poll released Thursday. Florida Senator Marco Rubio trails both Trump and Bush, tying retired neurosurgeon Ben Carson with 11 percent among registered Republican voters.

Biden came out ahead of Trump, the Republican front-runner, by 3 points in Florida, 10 points in Ohio and 8 points in Pennsylvania.