Jamestown Man Sentenced To Life In Prison For Boy’s Death 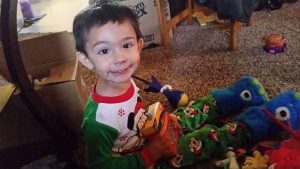 Sonora, CA – More than four years after 3-year-old Sean Arnold was found unconscious and suffering major injuries,  his murderer has been sentenced to life in prison.

Tuolumne County Judge Kevin Seibert today handed down a sentence of fifteen years to life in prison for 27-year-old Brett Wozynski. He is accused of killing Arnold in September of 2018 while watching the boy for his mother, who was also his girlfriend at the time, as earlier reported here.

District Attorney Cassandra Jenecke relayed that at the time of the incident, first responders found the case suspicious because there were no signs of injuries on Arnold’s body, which did not correspond to the severity of his condition. He was pronounced brain dead a short time later at UC Davis Medical Center, sparking a lengthy investigation.

Jenecke relayed that the forensic pathologist found Arnold “suffered five separate strikes to his head with a hand or fist, which caused a severe brain bleed.” Wozynski was arrested in 2019 and pled guilty on February 8th of this year to second-degree murder and waived his right to appeal his conviction. However, due to conduct credits, he will be eligible for parole in ten years with 647 days already served.

Jenecke noted that at the sentencing hearing today, the boy’s family vowed to attend each parole hearing. She also noted that April is Child Abuse Prevention Month and encouraged anyone who suspects child abuse to report it to Child Welfare Services at 209-533-5717 or after hours at 209-533-4357.