One Yosemite Campground Reopens: Another To Close 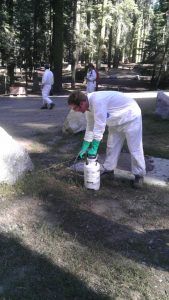 Yosemite, CA — The plague continues to cause concerns in Yosemite National Park.

The California Department of Public Health says the risk of the plague has been reduced at the Crane Flat Campground, so it is reopening today after being closed for four days. However, some squirrels were now found dead near the Tuolumne Meadows Campground, so it will be closed this coming Monday through Friday, for cleanup and treatment.

Dr. Karen Smith with the State Health Department says, “Plague is what we call endemic in California, meaning it’s present at very low levels all the time, in rodent populations, in various parts of California. Occasionally humans and the rodents fleas come in contact in a way that causes human disease. One of the good things about plague is that it is imminently treatable. The most important thing is to seek care early. Routine antibiotics can be used to treat plague.”

The state health department says the decision to close the campgrounds temporarily is being done out of extreme precaution. Plague is an infectious bacterial disease that is carried by squirrels, chipmunks and other wild rodents. When an infected rodent becomes sick and dies, its fleas can carry the infection to other warm-blooded animals, including humans.

Dr. Smith says in California, plague infected animals are most likely to be found in the foothills and mountains, and to lesser extent, along the coast.

Early symptoms of the plague include high fever, chills, nausea, weakness, and swollen lymph nodes in the neck, armpit or groin.