A Jump In Fatal Crashes Has More CHP Officers Patrolling 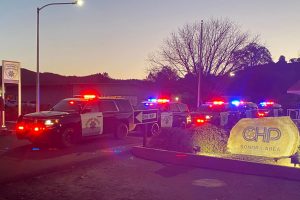 Sonora, CA – Motorists may have noticed more Sonora Unit CHP patrols on the roadways recently, which will continue through this month and beyond.

On Wednesday, four special enforcement details, pictured in the image box, headed out in the early morning to hit the streets. CHP spokesperson Officer Steve Machado relayed one major reason for the extra patrols: “We have had an increase in fatalities unfortunately in the county [Tuolumne]  this year, and so we’re trying to add extra emphasis to try to make sure that we’re out there just slowing cars down. We’re trying to be in more locations that aren’t patrolled as often.”

To date, there have been seven fatal crashes, some of which pointed to a disturbing trend in the county, as reported here. Machado says they are also emphasizing the need for people to buckle up, as some of those fatalities involved people not wearing seatbelts.

This move also comes as April is Distracted Driver Month. Machado explained, “We’re looking for people who choose to drive with their cell phones in their hands, texting, talking, and not utilizing the hands-free devices. Keep in mind that while you are driving hands-free, you’re not driving risk-free; there is still some kind of distraction there.”

No extra officers have been brought in, instead, all the officers are local. The number of added officers will vary throughout the month, with up to four extra patrols. They will be utilized both day and night to show an increased CHP presence on the roadways. The goal is to continue the patrols even after this month as often as possible, especially as the temperatures warm up.

“It’s bringing a lot more people traveling to our area,” relayed Machado. “We just want to make sure that we show ourselves out there as a presence to try to prevent these fatal crashes from happening because all crashes are preventable.”