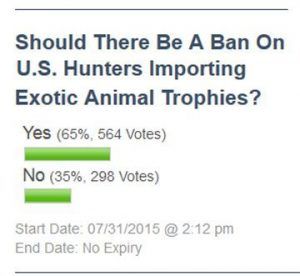 A recent informal myMotherLode poll asked the question “Should There Be A Ban On U.S. Hunters Importing Exotic Animal Trophies?” The results of the poll; 65% Yes and 35% No.

The U.S. Fish and Wildlife Service has already proposed adding the African lion to the list of species covered by the Endangered Species Act (ESA), but the agency has yet to finalize the designation.

The Service notes that the hunting, or take, of a wholly foreign species in its native country is not regulated by the ESA because the action is not subject to the jurisdiction of the United States. Regardless of U.S. import regulations, sport hunters are able to participate in African lion hunts in countries that allow it. The Service goes on to say, a scientifically based management plan that includes sport hunting will likely provide economic incentives for the range country and local communities to protect and expand lion populations and habitat.

The United States does issue permits for the import of other sport-hunted trophies from endangered or threatened species. Under the ESA, otherwise prohibited activities may be permitted if the Service finds that the activity will enhance the propagation or survival of the affected species and is found to be consistent with the purpose of the law. The Service has found that the import of trophies of bontebok, an endangered antelope from South Africa, as well as African elephants, leopards and straight-horned markhor–all threatened species – can benefit those species by supporting the overall species management programs established within the species’ native range. As a result, the Service has issued import permits for these species.

Four Democratic senators proposed the “Conserving Ecosystems by Ceasing the Importation of Large (CECIL) Animal Trophies Act” To try to ensure that species under consideration for protection are automatically covered by the tightest import restrictions on sport hunted trophies.