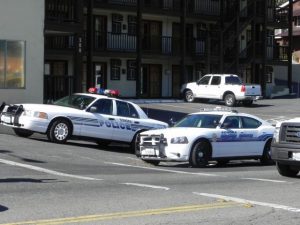 Sonora Police Chief Mark Stinson shares, “We saw an uptick on some very, very major crimes last year, which is not heartening. It’s concerning to me because we saw a large increase in violent crimes, which is never good to have in a small community like ours.”

The chart below from the city’s 2014 Annual Report shows there was one homicide last year, the first in 13 years. As reported in February 2014, police found Ricky Roberts shot dead in his auto body shop. Several months later, Twain Harte resident, 45-year-old Cheryl Lucero was arrested for the murder.  The chart also found assaults with a deadly weapon tripled, jumping from five to 15, between 2013 and 2014; there were 11 in 2012. Stinson explains, “We saw a huge spike…we started off the year very disturbingly, as well, because we had an assault with a deadly weapon about every week for the first six weeks.”

Asked if drugs were a major reason for the hike, Stinson says they played a role in the attacks but there were other factors as well, such as road rage. He had no exact reason for the surge except to say, “For some reason we are becoming a more of a violent community. We’re seeing that across the board. People are attacking people for no reason and it’s kind of weird.”

Combating this crime is difficult, according to Stinson. He comments, “Assault with deadly weapons is really hard to address, because those are…quick…to happen. Normally it’s not something that’s planned out and carried out…so it’s tough to address those.”

Outsiders cannot be blamed for committing those violent crimes, Stinson reports, as all the perpetrators were local. However, that is not the case with burglaries, which are up from 113 in 2013 to 128 last year, representing a 13 percent increase.  “We know for a fact, because of some of the cases we solved,” he states. “Those burglaries were committed by people from either Modesto, Ceres or Stockton.”

More officers out in public help curtail crimes, according to Stinson, who hopes to fill some of the currently “frozen” positions on the force. However, he says the public is also a key factor. While he cautions that citizens should never get physically involved in an incident, alerting police can prevent crimes. It helps, the chief stresses, “If the public can get the vehicle’s license plate numbers…any unique features, like bumper stickers or dents…a good description of the suspect.” Noting distinctive features, like tattoos, can be a great boon. “[Those details] have solved a couple of cases, because officers recognized the tattoo as belonging to a certain person,” he states.

Below is the year-end statistic comparison chart from the City of Sonora’s 2014 Annual Report: