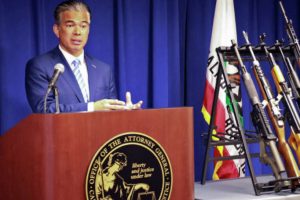 At a Wednesday press conference, Attorney General Rob Bonta broke down that number, stating, “602 guns that were previously unknown to us. 39 ghost guns, 28 assault weapons and 5 machine guns. And we removed 329,826 rounds of ammunition off our streets.”

The California Department of Justice reported that agents investigated more than 6,600 people in 2021 through the Armed and Prohibited Persons System, known as APPS, and implemented in 2006. Using this state registry, which is the only one in the nation, to cross-match databases to find people who legally purchased weapons but are now banned from ownership allows state and local authorities to seize the weapons.

Noting that the state’s efforts were hampered by the pandemic during the first half of last year, Bonta explained, “While the ongoing COVID-19 pandemic required agents to limit in-person contact during the first half of the year, the APPS team redoubled their efforts as soon as COVID restrictions allowed, returning monthly productivity to pre-pandemic levels in the second half of the year.

To make up for lost time during the earlier part of the year, agents conducted four regional large-scale sweeps in the second half of last year, resulting in 55 arrests. In January, they cracked down on Bay Area counties, and last month they targeted people in the database in Los Angeles County, with Bonta praising, “They get deadly illegal firearms out of our communities.”

The APPS system to date has 24,509 people listed since the beginning of this year and continues to add more.