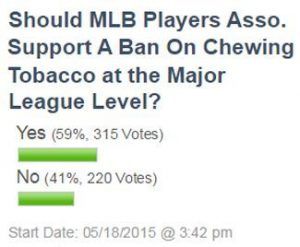 Fifty-nine percent of the 535 votes were in favor of the association making a decision to ban chewing tobacco. A proposal to ban tobacco use was rejected by the players in 2011 They took the position that it is a matter of individual choice and as long as it’s legal, baseball can’t ban it. The idea behind proposing the rule change was to look out for the health of the players and present a better example to children.

The current labor agreement covering 2012-16 imposes a fine if players carry tobacco packages or tins in their back pockets when fans are permitted in ballparks, during pregame and postgame interviews, or at team functions. The union also instituted spring oral check ups and says they will do everything they can to get individual players to quit the habit. The use of smokeless tobacco was banned for players with minor league contacts in 1993.

California State Assemblymember Tony Thurmond (D) introduced a bill in February that would ban the use of chewing tobacco at MLB games in California among players and fans at the state’s five ballparks. More about Assembly Bill 768, the Tobacco-Free Baseball Act, is in our news story here.

More recently California lawmakers introduced legislation that would increase the legal age to purchase tobacco products and increase the tax. The news story “An Unprecedented Assault On Tobacco” is here.

A professional telephone survey of 420 Tuolumne County homes was conducted in 2012 for the Health Department. The survey found nearly 49% of households include at least one person using smokeless tobacco, cigarettes, cigars and/or pipes. Calaveras County Health Officer Dr. Dean Kelaita reported last year that the Calaveras County smoking rate has dropped to 18.2% but remains above the state rate of 13.8%.

Other informal poll results this week include 51% voting that technology is not making us less sociable; significantly more are voting that 2015 has been a bad allergy season.