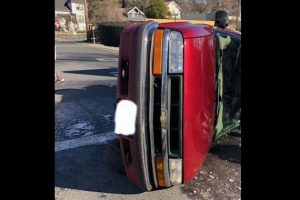 Sonora, CA – The CHP has identified the drivers involved in a collision at a busy intersection in downtown Sonora that impacted traffic during the afternoon commute.

Sonora Police Officers were dispatched to a two-vehicle rollover crash at the intersection of S. Washington and E. Church streets in front of the Bank of Stockton on Feb. 23, as originally detailed here. Traffic was halted as officers found a 2000 Chevrolet Trailblazer rolled over on its passenger side. Trapped inside was the driver and sole occupant, 27-year-old Hannah Hayes of Sonora. First responders were able to free Hayes, who was treated for minor injuries at Adventist Health Sonora.

After questioning both drivers and witnesses, officers determined that Hayes while crossing over Washington Street did not see a southbound 2010 Buick Lacrosse. The car’s driver, 67-year-old Rhea Anderson of Sonora, slammed on her brakes but was unable to avoid smashing into the SUV. Anderson also suffered minor injuries but was treated at the scene.

Traffic was slow going for about an hour as officers directed traffic and a tow crew worked to remove the wreckage and debris.