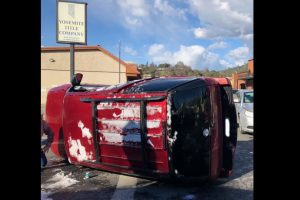 Update at 4:30 p.m.: Sonora Police report a tow crew has removed the wreckage after a two-vehicle crash in downtown Sonora and traffic is moving freely once again along South Washington Street. The two-vehicle collision during the evening commute happened on South Washington Street in front of the Stockton Bank. The impact caused an SUV flipping onto the driver’s side, trapping a woman inside. She has been freed. There is no word on injuries. Further details on the collision are below.

Sonora Police report the collision happened around 3:20 p.m. at the West Church Street intersection in front of the Stockton Bank. One vehicle, an SUV, is on its side with a person trapped inside. An ambulance has been called to the scene, but there is no word on injuries. Officers are directing traffic, as it is backed up in both directions. An update will be provided as soon as new information comes into the newsroom.