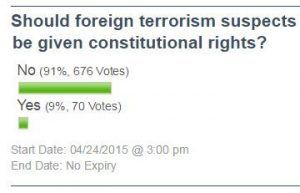 This week’s myMotherLode.com informal poll asked “Should foreign terrorism suspects be given constitutional rights?” An overwhelming majority voted No, 91 percent of the 746 votes over the four days.

Being a suspect means that you have not been proven guilty of a crime, just that you are suspected, open to, or under suspicion. U.S. Constitutional rights in relation to crimes are detailed in the bill of rights and other constitutional amendments. Outlined in the bill of rights: Amendment Four sets up rules for search and arrest warrants, Amendment Five: Rights in criminal cases, Amendment Six: Rights to a fair trial, Amendment Seven: Rights in civil cases and Amendment Eight: Bails, fines, and punishments. The Fourteenth Amendment addresses many aspects of citizenship and the rights of citizens.

The Geneva Conventions are a series of treaties on the treatment of civilians, prisoners of war (POWs) and soldiers who are not fighting, or incapable of fighting. The United States ratified the four Conventions of 1949, but not the two additional Protocols of 1977. The Detainee Treatment Act (McCain Amendment) was passed in 2005 to ensure proper treatment. There is also a Department of Defense Directive, Army Regulations, Combatant Status Review Tribunals and Administrative Review Boards to deal with the treatment of prisoners.

Senator Tom Cotton a Republican from Arkansas proposed the Guantanamo Bay Recidivism Prevention Act of 2015 in March. It seeks to prevent recidivism by encouraging foreign countries to “properly monitor former detainees.” The bill is currently being reviewed by a committee.