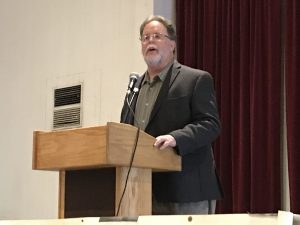 Sonora, CA — More prospective candidates for the June Primary election are stopping by the Tuolumne County Election’s Office to take out nomination papers.

We reported earlier that incumbent District Two Supervisor Ryan Campbell is seeking re-election. His first prospective challenger, David Titchenal, took out papers yesterday. Titchenal, who has been a leader in the local State of Jefferson movement, also ran for the seat four years ago.

The other Supervisor seat on the ballot, District Three, still only has only one candidate, incumbent Anaiah Kirk.

There will be two Sonora City Council seats on the ballot, and neither of the incumbents has taken out paperwork to this point, Colette Such and Jim Garaventa. The prospective candidates who have done so are Suzanne Cruz, Darren Duez, Jeff Lockwood, Kurt Bryant and Andy Merrill. The top two vote-getters will win the seats.

Other races in Tuolumne County, in which only incumbents are running to this point, are Superintendent of Schools (Cathy Parker), Assessor-Recorder (Kaenan Whitman), District Attorney (Cassandra Jenecke), Sheriff (Bill Pooley) and Treasurer-Tax Collector (Justin Birtwhistle).

Also, no one has filed for the County Clerk and Auditor-Controller position that is currently held by Debi Bautista.

March 11 is the filing deadline. If an incumbent does not run for re-election, it is extended to the middle of the following week.